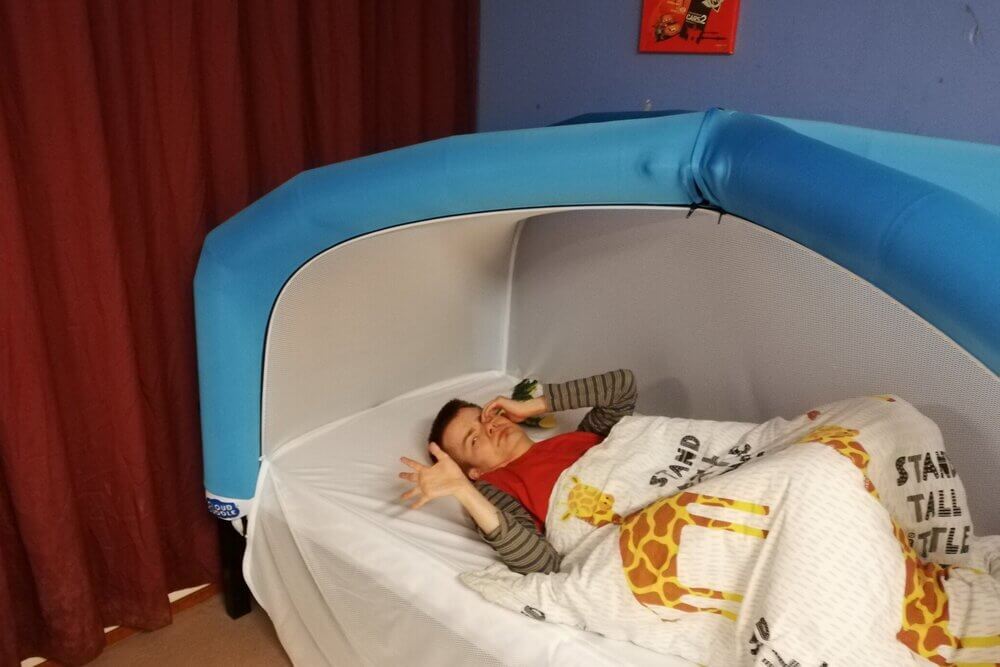 Gijsbert van der Vos is a personal assistant at Gemiva-SVG. A large care organization in South Holland. He was recently faced with a dilemma.
One of the residents had broken his leg and was absolutely not allowed to put any weight on it. How was he going to manage that with a boy who regularly climbs out of bed at night? Gijsbert rented a special bed that could be locked. The resident was safe and reacted positively to the enclosed space. Even during the day he indicated that he wanted to go to his bed. Therefore, the behaviorist wanted to do a test with a bed tent like CloudCuddle. She suspected that this would reduce his nighttime wandering behavior.

After the break, the resident was allowed to sleep in a normal bed again. But the behaviorist suggested first doing a trial with the CloudCuddle bed tent. After all, the resident had shown that he likes a private environment. Perhaps he would also calm down in a CloudCuddle and sleep better. “We put the CloudCuddle on his regular bed and watched him closely with camera monitoring,” says Gijsbert. “We saw how calm he was and how, despite turning and turning, he had no desire to get out.”

That CloudCuddle has a positive effect on sleep behavior has already been proven more often. For example with children with autism. Gijsbert’s reaction shows that this can also apply to adults: “The security of CloudCuddle also takes away the incentive to sit up straight. As a result he sleeps better, is better rested in the morning and it saves us having to work at night. After all, we don’t have to keep taking him back to bed. We see CloudCuddle as a great addition that allows an institution to create a private bed quickly and flexibly. We find it ideal for stimulus attenuation in clients who exhibit wandering behavior at night.”

“Folded up, CloudCuddle fits into an overnight bag and thus takes up little storage space. Moreover, we can wash the CloudCuddle ourselves and thus disinfect it, which is not possible with other beds. And not unimportantly: CloudCuddle is many times cheaper than other solutions. The leg fracture was, of course, annoying for our resident. But now that he has healed, he has gained a nice sleeping cocoon. For Gemiva, this bed tent is a practical tool to give residents a better night’s sleep. And because the bed tent reduces wandering, we also have more peace at night.”

Want to try out the CloudCuddle bed tent yourself for a weekend?