Sleeping peacefully is not a matter of course for multiply disabled children and their parents.

Loes Oorschot (26) has a severe intellectual disability, she cannot talk and has a cerebral visual impairment (CVI). She lives at home with her parents and has been sleeping in a CloudCuddle for two months. Her parents didn’t know what hit them. Just sleeping peacefully all nights. What an unprecedented luxury! It had been a long time since they had last experienced that. 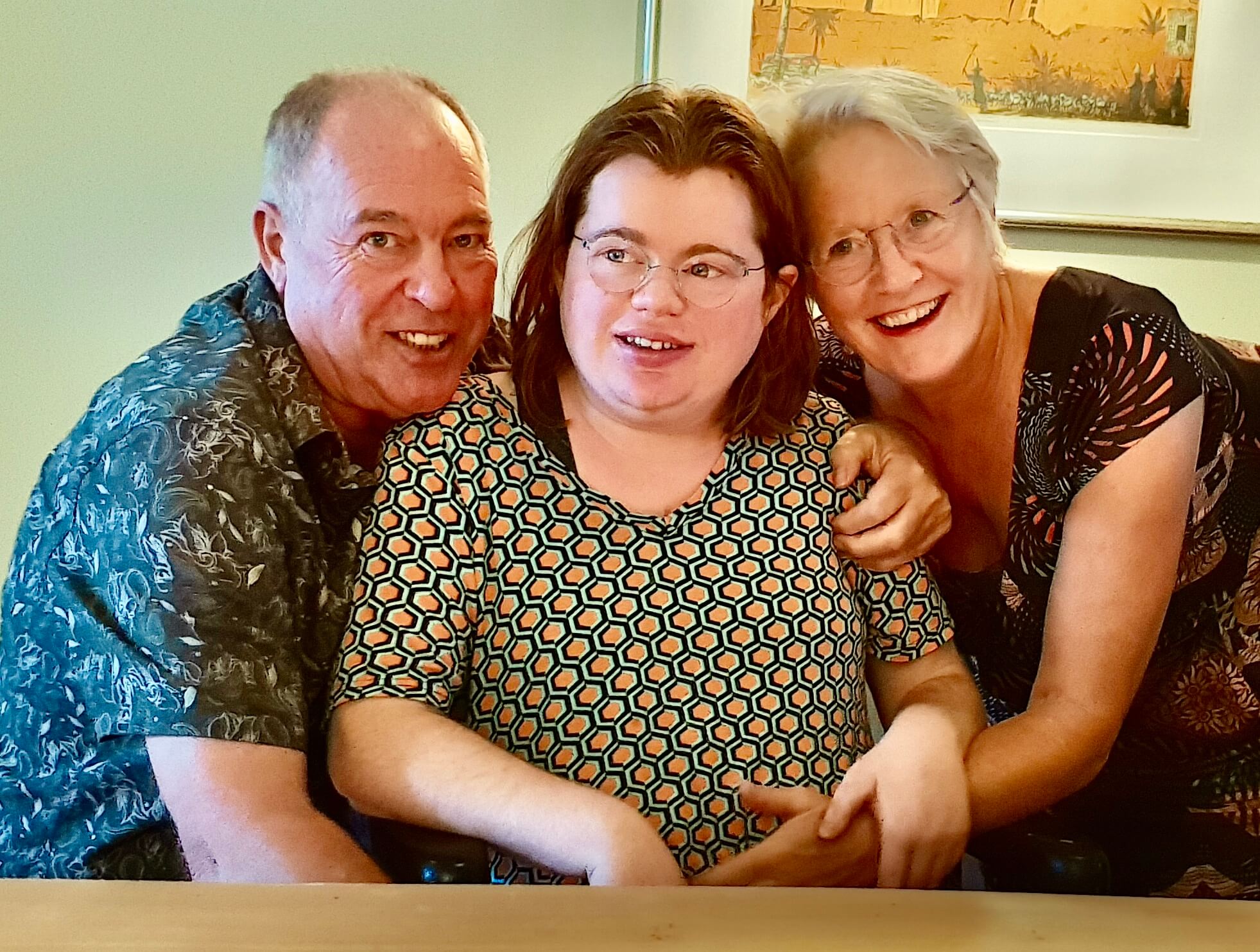 “Since sleeping in the CloudCuddle, she is once again the sweet, cheerful and casual Loes”

Mother Louise is eager to share her experience with the CloudCuddle bed tent with as many people as possible. She is also committed to convincing professionals and institutions of the added value of CloudCudddle. “My daughter Loes has been going through a difficult period. Last year she lived in an institution for a short time. That didn’t go well at all. It disturbed her to such an extent that a crisis situation threatened. After two months Loes came back to live at home, but the damage had already been done. She cried a lot and loudly, sometimes banged her head against hard materials, threw things and couldn’t sleep ….. This was an intense experience for her, for my husband Kees and me and for her supervisors. The AVG doctor prescribed antipsychotics so that Loes would sleep better. But this didn’t really work. The nights remained restless.”

Based on her changed behaviour, a team was formed around Loes with the help of various agencies that introduced a clear structure to her day with lots of rest, cleanliness and regularity. Louise continues: “This gave some improvement. But it was an unstable balance. Periods of more rest and relaxation alternated with periods of restlessness. Loes also lay awake many nights.”

Louise had heard of CloudCuddle before, but it had faded into the background over the past year. “I am surprised myself because I heard from several sides that children with low levels and a lot of restlessness can benefit from it. This year CloudCuddle came back into the picture partly because of our wonderful family support worker Nathalie.”

“We were a bit apprehensive about using it. Loes was often awake again and would regularly get out of bed at night. She had been doing this for years, but now she woke up more often than usual. She also cried a lot and was anxious and distraught. For the caregivers at night and for us as parents, this is almost impossible to do. The nights are then long and grueling!”

Sleeping in a bed tent

Louise continued: “When the bed tent came in, we set it up immediately. We thought that Loes would never accept that we would ‘lock her up’ in a tent; because that’s how it felt to us. It would probably take a lot of patience and perseverance on our part to get her to sleep in a bed tent from now on after 26 years in a regular bed.”

“With fear in our hearts we entered into the trial. We agreed that we would leave one side of the tent open so she could still get out. But what happened? Loes lay down in the CloudCuddle without any protest! We hadn’t expected that at all. The first night she slept really well. She did not get out of bed. We thought: this must be a coincidence. The second night, an attendant lay down next to her and the bed tent zipped up completely. The nurse didn’t sleep a wink. But Loes slept like an ox!”

“We could hardly believe it. We were so happy. We didn’t expect such a relatively small change to have such a big effect. Anyway, we were still a little skeptical. We wanted to make sure first that it would stay that way. And what is the case? We are now two months on and Loes is still sleeping like never before.”

“I continue to be amazed that Loes doesn’t protest. In the first few weeks she slept around the clock. She had a lot of sleep to catch up on. Loes probably feels safe and secure in the CloudCuddle. Whatever the case, I would begrudge this tool to any parent who is struggling to keep a child in bed.”

Not getting out of bed

“If she wakes up once in a while, we go to her, open the zipper a little and reassure her. She has absolutely no desire to get out of bed. We talk and sing softly to her and then Loes goes back to sleep. And so do we! If only we’d had this 22 years earlier,” sighs Louise. “That would have saved us all a lot of stress and a lot of sleep.”

Now that Loes is sleeping better, she is also doing better during the day. Louise: “Very slowly she is gaining confidence in her surroundings and she is becoming our sweet, happy and relaxed Loes again. This allows us as parents to relax a bit more. The CloudCuddle really made life more beautiful and bearable for us after a very difficult time in which we saw no way out. Loes was almost admitted to the crisis centre. We don’t want to think about what would have happened to her then. We are now thinking about reducing the antipsychotics. We’re not afraid to do that because of the good night’s sleep in the CloudCuddle.”

Louise doesn’t quite understand why the CloudCuddle is not reimbursed by health insurance companies. “A much more expensive bed box is reimbursed, but not this tool. I find that strange. Our request for reimbursement has already been rejected twice. But I am going to lodge an objection. For us, the bed tent is an absolute godsend. And I can imagine that this is also true for other families.”

Want to read more about ways to finance the purchase of a CloudCuddle?

Want to try out a CloudCuddle yourself? You can. We’d love to hear about your experiences.